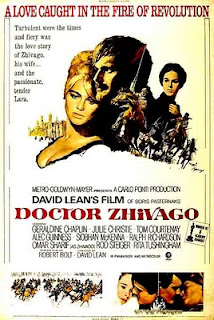 Composer Maurice Jarre’s music from Doctor Zhivago begins with subtle and quiet undertones, then it works its way through melodic crescendos of Russian inspired flavoring in an orchestral masterwork that shines the light on a simple theme: Lara's Theme. This is where my heart soars with memories of young love. Who hasn’t taken their girl to the movies?  She and I went just once, that I can remember. It was so long ago - 1966.  I was seventeen, but that one time not only captured my heart, but my imagination as a photographer of movies. Sadly, the love didn’t last. We were very young. But the passion of a great movie and great photography left an everlasting impression. I was a budding photographer at the time, and this film made me realize that I had entered the right profession.
Doctor Zhivago is an epic film set in an epic time: A tragic love story carried along by the turmoil of the Russian revolution. It could have been just another movie among the many. But it wasn’t. Zhivago stands out as the perfect epic, like Lawrence of Arabia a few years before and Bridge on the River Kwai before that. It was film maker David Lean at the prime of his creative life. Unlike most film makers, Lean knew how to tell a story for the big screen, scattering it with emotion, heartbreak, love and anticipation - filled with the cinematic nuance that everyday life holds for us all. It's a wide reaching adventure, boiled down to a heart breaking love story between two beautiful people. When we watch one of Lean’s films, we are poetically transported to an experience of place and time, with characters that live, breath and hurt. With Doctor Zhivago, we get involved as if we knew the characters personally. We experience the tragedy of war and marvel at the lyrical arrival of spring. We shiver through the cold Russian winter and feel the warmth and romance of falling in love. It’s an experience romantics will never forget.
All the film artists who worked along side Lean were just as magnificent in their work: Director of Photography Freddy Young, whose lighting compositions were so exquisite that they brought the art of photography into our lives like no other. Why couldn’t real life look so good? And the epic was all tied together with the wonderful symphonic score by Maurice Jarre. He writes a good tune, but captures our hearts and emotions with pure orchestral beauty. Young and Jarre both won individual Oscars, as did writer Robert Bolt, Designer John Box, Costume Designer Phyllis Dalton. Sadly neither the film, nor David Lean won an Oscar. But the legacy of this great artist lives on like no other.
For me, inspiration means so much when you observe the best. And perhaps, in some way, this film was part of my own destiny to find my own profession in film making rather than still photography. I can honestly say that I tried, throughout my own career, to live up to the wonderful imagery and style set by the great masters of my profession. My life's learning and work is a humble testament to their creativity.
Recently, the Blu-ray High Definition version of Doctor Zhivago was released. Until now, I hadn’t seen it look as spectacular as when I first saw it in 1966. This HD version is a monumental tribute to the quality, longevity and restoration of this great masterpiece and the artists who created it. This was the first of the three best films from Director David Lean to be offered on Blu-ray. I am now anxiously awaiting the Blu-ray arrival of Lawrence of Arabia and Bridge on the River Kwai.

“Every time I presented a new theme to David, he rejected it and said that I could do better. ...  Then, one Friday, David told me to stop work, to stop thinking about the film or the music and go away for the weekend to the beach or mountains, to clear my brain and start afresh on the Monday. ... After those 2 days of clearing the brain, in one hour on Monday morning I had found Lara’s Theme ...”
- Maurice Jarre
“I've just begun to dare to think I perhaps am a bit of an artist.”
- David Lean
Pasha: I used to admire your poetry.
Zhivago: Thank you.
Pasha: I shouldn't admire it now. I should find it absurdly personal. Don't you agree? Feelings, insights, affections... it's suddenly trivial now.
at 1:05 PM