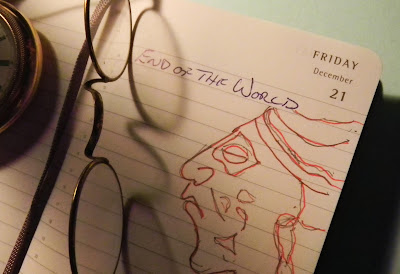 It seemed like a good time to buy my yearly diary for 2013. But, I did ask the sales clerk if I could receive a refund if the world ended on December 21st, as the Mayan calendar has predicted. He laughed and told me that if he was able he would, indeed, give me a refund.

The Mayan calendar ends on December 21st, 2012. That's soon. Is there any sign of a catastrophic, world-ending event about to happen? It's not that I'm making fun of what could be a disaster for all: I just can't see how anyone, let alone the ending of an ancient calendar, can predict a certain day for it to happen. There could be an unusual Earth movement, a major earthquake, a storm, a volcano or a tsunami. But some recent predictions include an asteroid hitting the earth with such great force that destruction would be worldwide. There isn't one in sight.

Perhaps another planet will nudge Earth as the magnetic forces of the universe come into alignment at this time. Then again, it could be the recently predicted earth's magnetic pole shifting. Imagine the earth's magnetic, gravitational pull, sliding to another side of the globe from the North Pole. If the skin of the Earth shifted, it would tilt the planet in another direction and hurtle all of us out into space, which is quite possible. That would be a big one and wipe us all out. But it may not last one day. It could take a week, a month or more. And, if we were involved in a real earth shift, would we really have the time or the interest to consult our calendars?

Another predicted reason for the Mayan calendar ending in 2012, is that the gods are supposed to return to Earth. These are extra terrestrials, men (and women) I presume, in space suits who fly down from another, far-advanced planetary civilization to implant us with new knowledge.

As we know, the Earth is not totally perfect for human life. Ninety-nine percent of all the species that have ever lived are now extinct. Most of the people who have ever lived are now dead and gone. We could be swallowed up by a nasty animal, drown in a rushing river, burn in a raging fire, be poisoned by bad food, succumb to the plague, be crushed by a crumbling mountain, fall off a bicycle or many other strange, and not too happy, accidents. In the long run, we are not safe. There are so many things we must be on guard against. Yet, some of us live to be a hundred years old. However, the Earth, the planet will survive a lot longer than us. 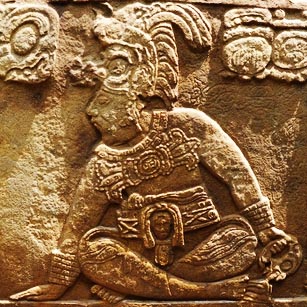 The Mayan calendar is a man-made measurement of time. While most calendars go from year to year in a never ending cycle, this one continued for hundreds or thousands of years only to stop this month. But the Mayan's never predicted a doomsday to follow. So why does it's demise need to be regarded as something sinister?

On mass, we are thinking, feeling, emotive and worry-hungry beings and every scary idea that permeates throughout humanity frightens us silly. We stew over things that may or may not happen in our future or our lifetime. Perhaps we should be more concerned about fixing something really scary that we could fix, i.e. global warming (a REAL pending major disaster), pollution, crime, ignorance, corrupt politics, peace, personal happiness. But these great personal and societal concerns continue to elude us and our societies. We live with our heads in the sand about the obvious problems and worry about everything else.

The bright light of universal energy shines through each of us. We are of this universe. We are made from the same atoms that created everything. So if we explode in a great ball of destruction it would be natural. We will be returning from whence we came, and, as many believe, to perhaps rise again in another moment of time. Life is circular, born - die - born, transcend.

The solution to the end of the Mayan calendar is to welcome the new dawn and to find happiness every day there after. It could be a new beginning, so keep loving, creating, smiling, dancing and singing along with the stream of life and consciousness we all love so dearly. Think yourself lucky you've been given this wonderful moment to participate. You showed up. Now, truly live.

And while you're at it, try to fix the world. Please.

Perhaps I'll hang on to that new diary, at least until 2014 rolls around.

"Whenever life gets you down Mrs. Brown and things seem hard or tough
and people are stupid, obnoxious or daft and you feel that you've had quite enough.

Just remember that you're standing on a planet that's evolving
and revolving at nine hundred miles an hour,
That's orbiting at nineteen miles a second, so it's reckoned,
a sun that is the source of all our power.
The sun and you and me and all the stars that we can see
are moving at a million miles a day.
In an outer spiral arm, at forty thousand miles an hour,
of the galaxy we call the milky way.

The universe itself keeps on expanding and expanding
in all of the directions it can whizz
as fast as it can go, at the speed of light, you know
Twelve million miles a minute, and that's the fastest speed there is.
So remember when you're feeling very small and insecure,
How amazingly unlikely is your birth
and pray that there's intelligent life somewhere up in space
'Cause there's bugger all down here on Earth."