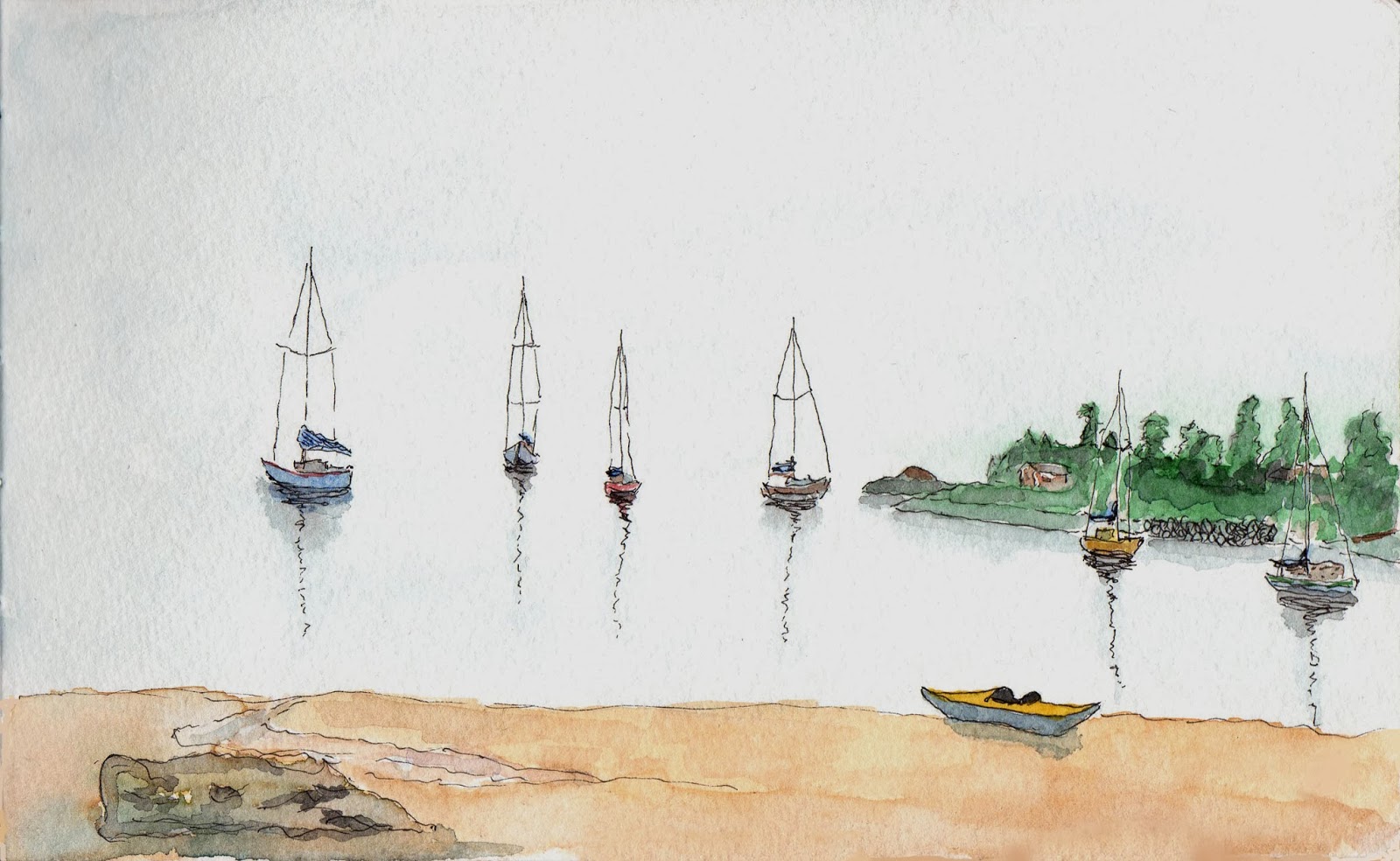 Immersed in the meditation of sketching, I was suddenly jarred out of my reverie by a shrill voice.
"Are you from around here?"
I looked up from my park bench to see a rather large white-haired woman with a Corgi dog. They were both staring at me from the beach.
"Yes," I said, with a smile, fully expecting to be speaking with yet, another friendly fellow-Cadboro Bay villager.
"Are you a voyeur?" She asked.
Odd question, I thought. I was immediately inclined to offer my silly sense of humour and respond
with a "yes," but, I paused and allowed my rational brain to take over, realizing that this person might be serious.
"What's that?" I asked, feigning ignorance while pondering her situation.
"Don't you know what a voyeur is?" she steamed.
"Someone who spies on others?" I politely replied.
"Were you taking pictures of me and my dog on the beach?"
"I take pictures of the beach, the houses, the boats, the logs. I'm a sketcher." I told her. "I draw pictures then record the colours with my camera for later paintings. Would you like to see?" I asked, politely holding out my sketchbook.
"Well, no. I guess I'll have to believe you," she replied.
"I'll show you if you'd like." I offered, again.
"No." She said bluntly, turning around and walking off down the beach.

As the English expression goes, I was gobsmacked, astounded, utterly astonished that someone would think I was literally a voyeur. As I resumed my sketching, I thought about the word, "voyeur." I suppose I have always been an observer, a witness, a recorder of others. That's what a photographer is. That's what a sketcher is. That's what a human being is. But a voyeur?

I packed my sketch pad and headed down the beach to catch up with this woman. I wanted to tell her that I had been a photographer all my life and that I had never been called a voyeur before. However, when I did catch up with her, she began telling me she didn't like sketchers and photographers, saying they interpreted the world like journalists, with a point of view that wasn't necessarily the truth. Her attitude was anything but congenial. I tipped my cap and wished her a good day.
"I'm trying to have one," she shouted after me as I walked away.

A beach walk is a good place for contemplation and thought. Was I a voyeur? The dictionary says that a voyeur is an obsessive observer of sensational or sordid subjects; a person who derives sexual pleasure from secretly observing other people, or a person who enjoys seeing the pain or distress of others. Over the years, the word has been used very liberally to mean an interested watcher; someone who just enjoys observing life. Hence, among friends, I used to say, in fun, that I was a professional voyeur. But from this woman's point-of-view I was spying on her when I took some simple pictures of the beach.

Photographers, film makers, television directors, artists of all kinds have used humanity as their muse since time began. Leonardo Da Vinci and Michelangelo sketched caricatures of people in their local pubs to eventually fit into their great masterpieces. Great composers were influenced by street musicians and folk songs from many cultures. Shakespeare and Hemingway found their art among the voices of ordinary folk. So for a photographer to shoot a scene that includes some people is quite normal. Life drawing/sketching nudes or photographing nudes is also considered quite a normal exercise.

We are all innocent voyeurs. We all observe each other. That's how we learn. We see others and, through them, we see ourselves, gain knowledge, live our lives. Our visual interaction and understanding of others is the essence of who we are. We are people watchers, whether through our own eyes or someone else's eyes, such as via television, magazines or motion pictures. What is a movie but a peering into someone else's life? What is television but a means to bring others into our lives? But, then I ask myself, is not the United States NSA spying program a form of government financed voyeurism?

As a child, I was an observer. As an adult, I was a professional witness. I can have fun with the word, but could I ever admit to being a voyeur to strangers? No. The word itself has such a sigma that to admit you observe others, as a voyeur, is like giving small-minded people a rope with which to hang a good reputation. So, I use the word "visual artist." And that is what I do.

"Any photographer who says he's not a voyeur is either stupid or a liar."
- Helmut Newton

"I feel as though the camera is almost a kind of voyeur in Mr. Bean's life, and you just watch this bizarre man going about his life in the way he wants to."
- Rowan Atkinson

"Neighbours are the most indecent sort of folk around.  Nothing but voyeurs and gossipers. As a community we would be much better off without them."
- Bauvard - The Prince of Plungers

"We've become a race of Peeping Toms.  What people ought'a do is get outside their own house and look in for a change."
- John Michael Hayes - Screenwriter for Hitchcock's Rear Window
at 4:06 PM