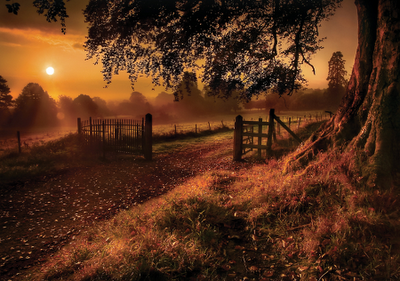 Off the tip of the highest oak
far away from us city folk
the little leaf begins to fly
falling, falling from the sky
that cloud filled Autumn sky

Blown by the restless breeze
over and through the forest trees
around and across the hard woods bare
the soaring leaf travels who-knows-where ...  without a care
falling, falling from the sky
that cloud filled Autumn sky

Fly, fly, where does it dare
across the fields harvested bare
along the meadow’s hedgerow there
and up into the Autumn sky
that cloud filled Autumn sky


Up, fly up, fly up again
around the trees and swooping low
across the pumpkin fields it blows
through the weathered village fair
down the gushing streams with care
falling, falling from the sky
that cloud filled Autumn sky

And up again and down to rest
upon a farmer who laughs in jest
a gust sweeps by and again it blows
along stone fences built so low
until the final journey slows ... and stops

The little leaf rests, no more gusts
until the snow lays deep and crush
and blankets it till spring’s wet slush
to turn it into ground and mush
to help a new oak find it’s lie
and aim up to the fresh spring sky
to grow a leaf and reach so high
with life’s true colours of green then red, oh my

When seasons turn in nature’s wise
Autumn tells the leaf “let go and fly,
begin your  journey before you die.”
So the leaf begins to fly
into the windy, cool, fall sky.
That cloud filled Autumn sky

This week, I was devastated to hear of the sinking of HMS Bounty by Hurricane Sandy. The lure of this ship and her story grabbed my imagination when I was a lad, and in some ways, it became a metaphor for the way I learned life.

In 1963, I was living in England, when, following a family separation of many years, I was invited to visit with my grandparents in Lunenburg, Nova Scotia. Meeting grandparents and other family members, cousins, uncles, aunts, great aunts, great uncles and distant relatives was thrilling, but so to was Lunenburg. I was born and brought up by the sea both in Canada and in England. Sea fishing and tide pools were my muse. In Devon, where I lived, people told tales of smugglers and pirates and their exploits, and Treasure Island was one of the first books I read. I loved adventures of the sea. To have the opportunity to wander the docks of Lunenburg, where the sea was a way of life, was an adventure. I was 14 and that summer became a life changer.

Lunenburg was a bustling community of fisherman and ship building, and most made their living from the sea. The harbour was fascinating and each day I explored the wharfs and shipyards where the overwhelming smell of freshly caught fish, being unloaded from the deep sea trawlers, permeated the lower levels of the hilly Atlantic town. At the end of a string of brightly coloured boathouses and docks was the Smith and Rhuland boat yard. Here, weathered and hardened, boat-building craftsmen were carving and molding the finishing touches to the Bluenose II, a replica of the famous Canadian racing schooner that was sunk off Haiti in 1946.

That July, I watched the long, sleek, black hull of the Bluenose II slip out of the boat shed, down the slipway and into the harbour with a shared splash of excitement for all Canadians. My grandfather had another opinion. He felt the Bluenose had been taken over by commercial interests, namely, a beer commercial for Schooner Beer. So he'd lost interest in the rebuilding and he didn't attend the launch. However, his excitement surfaced when he talked about being at the same boat slip, a year earlier, for the launch of the Bounty.

I had never heard of the Bounty, so my grandfather sat me down and told me the story. In 1788, the British naval vessel HMS Bounty, under the Captaincy of Lieutenant William Bligh, was sent on a botanical mission to Tahiti in the South Pacific. They needed to transplant some small breadfruit trees to feed the population in the West Indies. While in Tahiti, the Bounty's mission needed to wait for a period while the breadfruit plants became safe to transport. It was a long wait. Meanwhile, the sailors made friends with Tahitian women. Some got married, some had families on the way. When it came time to return to their mission, they didn't want to leave. They were forced to leave, then there was a mutiny on board when the ship's master's mate Fletcher Christian had a fierce argument with Captain Bligh about crew discipline. Bligh was set adrift in the ship's launch and Christian and the mutineers set sail back to Tahiti and onward to live on Pitcairn Island. There, they set fire to the Bounty and couldn't leave the island. 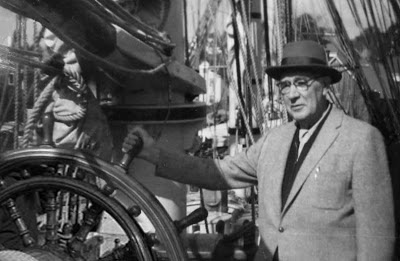 The replica of HMS Bounty was built in the Lunenburg ship yard for the MGM movie 'Mutiny on the Bounty' starring Marlon Brando. In some ways the ship revived the Lunenburg wooden boat building industry that had floundered since the days of the old fishing schooners; and it spurred on the careers of craftsmen, sailmakers, carpenters and shipyards. The Bounty was something special to Lunenburg. It showed the quality and the passion of shipbuilding of which this town was capable, and the town was plastered with proud photographs of the ship under full sail on her trial runs.

This youth's imagination was caught by the lure of adventure: Images of sailing the high seas to exotic places like the South Pacific aboard such a stunningly beautiful vessel. This was a dream. When I returned home to England, I read the three books written by Charles Nordoff and James Norman Hall: Mutiny on the Bounty, Men Against the Sea and Pitcairn Island. And when the movie came out, I think I was first in line on opening night. I was in awe of not only the story and the spectacular location of Tahiti, but I couldn't keep my eyes off the beautiful ship built in Lunenburg. I read books about the filming of the movie and learned that the Bounty was designed slightly larger than the original so they could use her as a sailing film studio. The film makers planned to burn the ship at the end of the film, as the mutineers had done. But, apparently, Marlon Brando stepped in and saved the ship.

We humans connect with certain interests. Sometimes we don't quite know where we are going with the odd ideas and thoughts that become planted in our heads. But the dots seem to connect later in life, when we realize something inspired us. Many are led to a career or a profession, others to a hobby or a passion. The story of "Mutiny on the Bounty" showed me the exotic, the beauty, the lush and the hardship of life at sea: The good, the evil that men do. The fate of the mutineers and the adventure opened my eyes to many twists and turns of our world. Bounty was no longer just a ship, it became a key to unlock many doors; doors of philosophy, of leadership and failure, hardship and triumph. I learned to question authority and think about consequences. And it was films like "Mutiny on the Bounty," with it's spectacular photography and scenery, and other epics like "Lawrence of Arabia" and "Doctor Zhivago" that brought the idea of being a photographer and cinematographer to my imagination. I went to photographic art school and later, after returning to live in Canada, I studied and apprenticed as a cinematographer at the Canadian Broadcasting Corporation.

One of my many international documentary assignments was to the South Pacific. I was to meet our filming crew in the Solomon Islands for a film about western influence in Melanesia. On route, I stopped off in Tahiti for a few days vacation. Tahiti was the first tropical island I had ever visited. Here, I learned more about the tropical paradise that enticed the mutineers from the Bounty and I visited Matavia Bay where the original HMS Bounty had anchored in 1788. Here, she waited for the breadfruit saplings to ripen before being transported to Jamaica. I also learned that Conrad Hall, the son of James Norman Hall, one of the authors of Mutiny on the Bounty, who lived in Tahiti, became an assistant cameraman on the Brando film, eventually becoming a cinematographer, like myself.

For me, the Bounty story became a metaphor. It sparked possibilities in me. It was a seed of inspiration from which to set sail on an adventurous life journey. It opened my thinking and my imaginings of what could be. What I found was an excitement of the exotic through travel, life styles, dreams, escapes. I began to realize that quality of life was built through experiences, sensuality, art, colour, creativity, knowledge. In turn, I could see life as a clear slate from which to truly live and dream. It was a vessel that set me on a curious, free-spirited navigation of life. For this, I will always be thankful.

This week, HMS Bounty's Captain was trying to sail around the worst Atlantic storm ever recorded. The ships engines were over powered and she took on too much water. The Captain called abandon ship, and they did. Two lives were lost, a great-great-great-great-great grand daughter of Fletcher Christian and the Captain, who was lost at sea. My heartfelt condolences to all.

October 29/ 2012, HMS Bounty sank to the bottom of the Atlantic Ocean. She was a beautiful piece of Hollywood magic. But, Hollywood and film sets are only illusions. Unfortunately, I never got to sail on the Bounty, and in someways, that is good. Better to leave her as a dream that helped open an awareness.

For all the great timbers and craftsmen of Lunenburg who built and sailed the Bounty, and to a distant relative named Charlie Hebb who made the original sails, I salute you.

My grandfather would be very sad.

"Dreams are like stars... you may never touch them, but if you follow them they will lead you to your destiny."
- Lawrence Block

"I'm not afraid of storms, for I'm learning to sail my ship."
- Aeschylus

"The ultimate value of life depends upon awareness and the power of contemplation rather than upon mere survival."
- Aristotle

"Men go abroad to wonder at the heights of mountains, at the huge waves of the sea, at the long course of the rivers, at the vast compass of the ocean, at the circular motions of the stars, and they pass by themselves without wondering.
- Saint Augustine

"The key to growth is the introduction of higher dimensions of consciousness into our awareness."
- Lao Tzu
at 5:53 AM