From a very young age the music of Felix Mendelssohn's Hebrides Overture (Fingal's Cave) has haunted me, mainly because of my love for the sea. I was born by the sea, lived by the sea and I love the sounds, smells and the sights of the undulating rhythms and the unrestricted wildness of the ocean. Just sitting and watching huge waves crash onto rocks fills me with euphoria: Truly a magnificent part of nature to be unquestionably respected.

Mendelssohn's music can paint a picture of the emotion itself. Within the music, one can hear the rolling ocean, white caps on the waves and breakers crashing onto cliffs and rocks. One also gets a sense of the majesty and grandeur of a great cave filled with strange rocks, like organ pipes pointing to heaven. Composer Johannes Brahams said of the music, "I would sacrifice all my works to have been able to compose an overture like it."

Many years ago, when planning a trip to Scotland, I was excited by the idea of taking a trip to the site of Mendelssohn's inspiration for the Fingal's Cave Overture.

The cave is situated on the small island of Staffa, near Mull in the Western Isles of Scotland. The name commemorates the third century Irish hero Fionn MacCoul who had his headquarters on Staffa and supposedly defended the Hebrides against pirate attacks.

My traveling companion hadn't visited Britain before, and Scotland was her introduction. Happily, she also loved Mendelssohn's music, for the Western Isles in rough weather can be quite a miserable experience. One needs a purpose to be there.

The ferry to the island of Mull departed Oban in the West Highlands at 8.00am. Loaded with mail, fresh supplies, locals going home and visitors like ourselves on the last guided "Three Island Trip" of the season to Mull, Iona and Staffa. 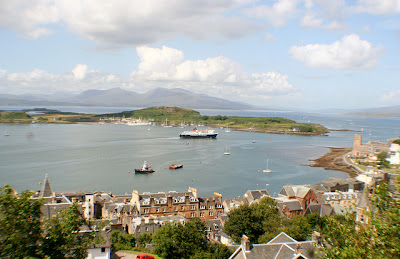 As the ferry boat motored out of Oban Harbour in the cool morning mist, the sea breeze and salt air was fresh on our faces. Out past the breakwater and the ever-flashing lighthouse we steamed, the strange sight of a Parthenon (McCraig's Tower) looking down on us from high on the hill over Oban, sitting like a crown on the head of an ancient Scottish King.

After a 45-minute crossing to the Island of Mull, the ship's bow broke the calm waters of the Firth of Lorn, an inlet off the fierce North Atlantic ocean. The weather was fine, but the forecast was not.

From high a rocky outcrop and dominating the barren landscape, Duart Castle kept guard on the approach to Mull as we sailed through the misty rain. Many battles were fought here, as with all the castles in Scotland. This day the cannons were silent.

As we landed at Craignure, a strange mixture of Scottish and Scandinavian accents filled the air as we waited for our bus for the drive over the moors to the far western shore of Mull. A retired group of blond and white-haired Swedes were here; not to rape, pillage and settle these shores, as their ancestors the Vikings had done. Today, I presumed, they were here as music lovers.

The bus bumped and weaved across the cold, wet, barren moors picking up the odd resident or two and dropping them off a couple miles later, then picking up some more.

The steady rain blended with the scenery and a raw atmosphere of foreboding clawed the mountain tops. This was definitely the place where ghost stories originate, where large crags protrude from massive bald highlands that tower high into the enveloping low clouds. My imagination could see visions of Highlanders charging through the valleys dressed in their kilts, waving sabers to ward off the encroaching enemy.

At Fionnphort, we jumped aboard the M.V. Laird of Staffa for our nautical journey out to Fingal's Cave. Putt...putt...putt. It was an older motor boat struggling under the helm of a young, but experienced Captain navigating the protected passage between the islands of Mull and Iona. To our left lay the famous Iona burial ground of 65 Kings of Scotland and Norway, including William Shakespeare's characters, Macbeth and Duncan.

The ocean was noticeably rougher out past the shelter of the islands as the tiny vessel heaved as graceful as a horse in slow motion. It was full of tourists, about twenty five, including the group from Sweden and a couple of young men who were seated at the stern. They, too, must have been music lovers because I heard one turn to the other and say, "I wonder if they'll play the tune when we get there?"

The rain held, but not for long. Staffa was a 45-minute journey, and we rode up and down and over the sea like a cork. In the distance we could barely make out the dark shape of the island. It got colder and more blustery and the sea's swells were getting larger; the wind strengthened and the rain returned.

Somehow the music was there with me. I knew the piece so well. Of course Mendelssohn had been inspired by the same kind of weather. You could hear it in the music, and it kept playing over and over again in my head. Then the cave loomed ahead and I could see the waves building up from the west and heading for the Island to crash onto the rocks as breakers.

The Captain's voice came over the small speaker telling us that it would be too dangerous to land everyone at the cave today; the seas were rough and people could be swept away by rogue waves. He had thought of landing at an other part of the island, but decided not to as the weather was getting worse; the tide was rising and the sea was getting rougher. This was the scene that the music portrayed so perfectly.

There it was looming over us, the open mouth of a large, cavernous shape carved by earth's upheaval and centuries of heavy pounding by the Atlantic Ocean. The island of Staffa is made of basaltic columns caused by the steady cooling of lava as it came into contact with the cold bedrock. As we studied nature's rugged work, we were being bounced. The waves would roll under the boat, lifting us high, then continue and break on the nearby rock columns with an energy of magnificent proportions. 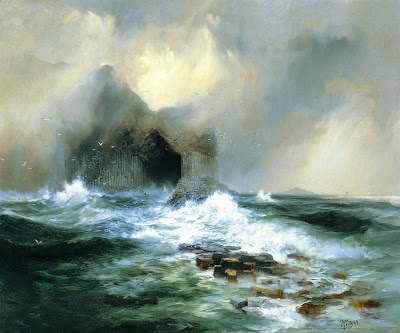 The Gaelic name for the cave is An Uamh Binn, "The Melodious Cave:" Particularly appropriate on hearing the thunderous sounds emanating from the cave's mouth, as the water hit the inside walls.

Mendelssohn's music described this agitated place perfectly. In fact, when the twenty-year-old composer visited the cave in 1829, he became quite sea sick. Not a healthy experience, but one to make a lasting impression.

Our Captain decided for the safety of everyone, to turn the boat around and head back to the sheltered passageway between Mull and Iona.

Now we were heading into the wind; the spray was worse than a heavy rain storm, as the small boat rode the large waves. All were huddled in the bottom of the boat. Many were sick and all were quiet as the journey back took twice as long as the passage out.

I kept looking behind at the cave and the lonely island. "The Lonely Island" was Mendelssohn's first title for his music, but what caught my eye were the two young men sitting at the stern of the boat, getting the full force of the wind and salt water in their faces. They were reveling in the experience.

My companion and I felt a little sick and were soaked to the skin, but this was truly living the experience. Now, every time I listen to Mendelssohn's overture, I re-live the thrilling experience. A moment I'll never forgotten.

Art is the great connector. We, as individuals, are moved by the creative spirit. Creativity is something we are all born with and it makes us find life in a most profound way. Whether we inspire others through something we have created; art, music, painting, theatre, or one of the other great mediums, or we are inspired by someone else's creation, art gives us a new way of looking at life. In art and creativity we find the experience of being alive.

QUOTES:
"In order to make you understand how extraordinarily The Hebrides affected me, I send you the following, which came into my head there."
- Felix Mendelssohn

(From a 1829 letter to his sister Fanny, in which he included a musical sketch of the opening notes of The Hebrides)


"Many composers, before and since, have used music to depict the physical world, but in Fingal's Cave, Mendelssohn set an example that has never been equaled."
- Geoff Kuenning

"Though everything else may appear shallow and repulsive, even the smallest task in music is so absorbing, and carries us so far away from town, country, earth, and all worldly things, that it is truly a blessed gift of God."
- Felix Mendelssohn

"Without music life would be a mistake."
- Friedrich Nietzsche

"Music is the mediator between the spiritual and the sensual life."
- Ludwig van Beethoven


This is my favorite rendition of this wonderful piece of music.
www.youtube.com/watch?v=zcogD-hHEYs


"Moods of the Sea" -1941
A cinematic tone poem of seascape set to the music of Mendelsshon's Hebrides Overture
http://www.youtube.com/watch?v=wlbAoGSslAQ