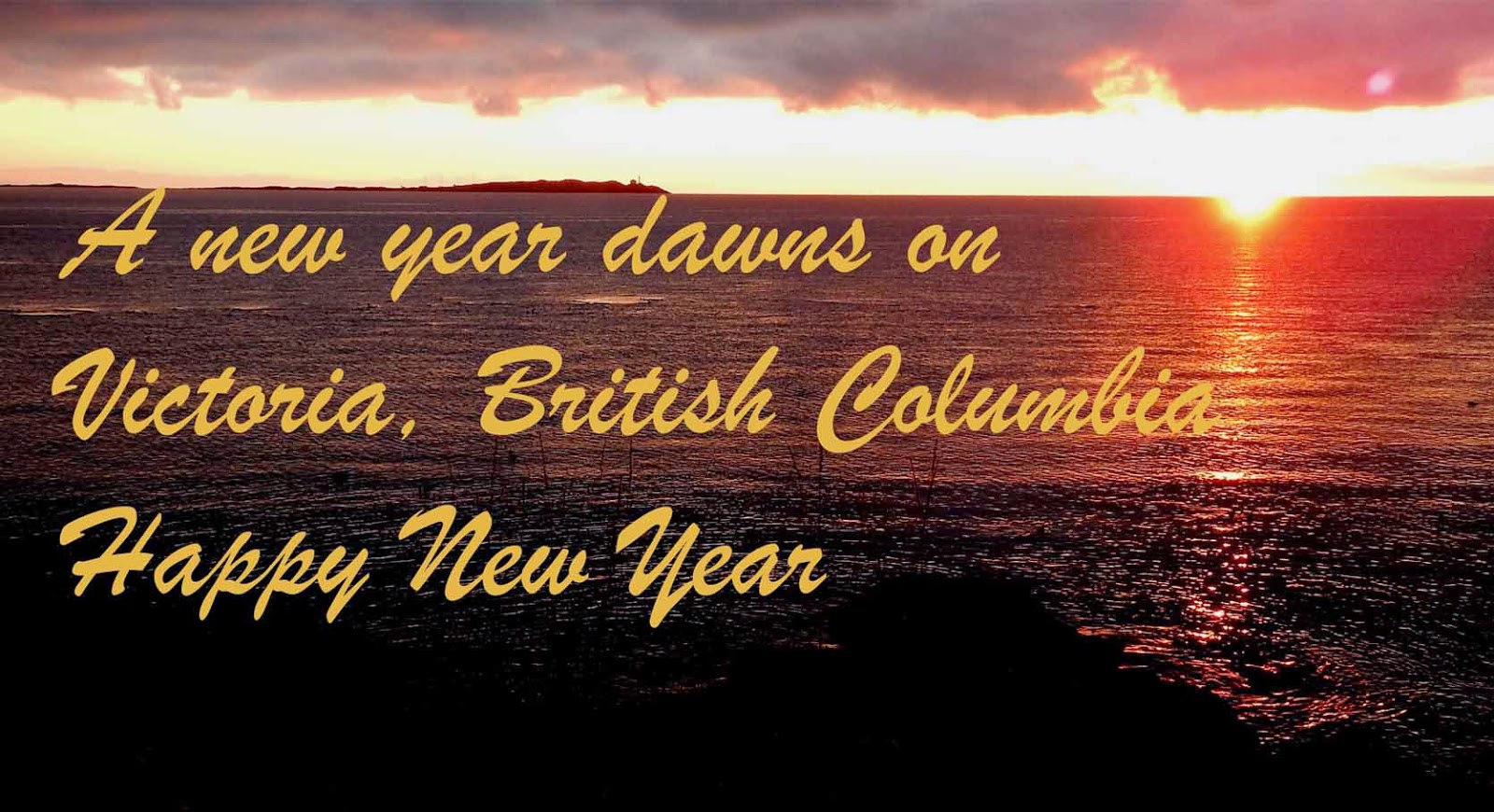 This year, as with many previous years, the compulsion to get out and greet the first dawn of the New Year was a guiding force. Thankfully, the weather cooperated, at least enough to see the sun beams rise while we embraced the cool Canadian air.
Victoria's Clover Point was a short drive and a perfect place to observe the sun's trajectory out of the Straight of Juan de Fuca and the Salish Sea. Although I've seen dawn break, and even filmed it many times in my life, it remains life-affirming to experience nature's spectacle at dawn.

Looking east, the blue twilight slowly gave way to patches of gold as clouds caught the glow of dawn. As we watched the light slowly brightening, I reminisced about a time when one of my filming assignments was to capture a sunrise for a television documentary. The opening of the film called for an actor to sit on a rock reciting a poem as the sun of the new day slowly rose behind him.

It was mid summer, and we were on the shore of Lake Ontario in the Cherry Beach area of Toronto. I had seen the location a few days earlier and had determined that I needed a big light to fully illuminate the actor and compensate for the brightness of the sun as it appeared from the lake behind him.

On the day, we were set and ready. We had selected the rock where the actor would sit and established just where the sun would rise. The camera was set, the sound man was in readiness and we had placed a large six-thousand-watt light aiming at the actor's spot.  All was set for the sunrise, but, as I looked over at the director, I could see a heated discussion between him and the actor. Somehow the office had neglected to tell the actor that he was to learn and recite a full four minutes of dialogue in one shot. The camera would be continually rolling; a one take deal.

The actor hadn't memorized all the lines; merely one page.

"Couldn't you cut the camera?" he asked.

"But, the reason we are all here is to have the sun rising behind you. How can we cut away from that?" answered the director.

I felt for him. Richard Monette was an excellent Shakespearian actor and well accustomed to learning great soliloquies and speeches for multiple plays; but not in five minutes. This day, I could see the panic on his face as the glow from the east grew brighter. We were all anxious, wanting the sun to slow its entrance as we watched Richard pace the shoreline, nervously trying to cram lines into his head.

"Richard, we need you now," called the director.
Richard, his head full of partially memorized sentences, slowly took his place on the rock.

The glow brightened and I rolled the camera. The director called, "action."

And as the sun reared its fiery head above the horizon and shone brightly toward us, Richard looked toward the camera and spoke.

He recited every word of the four minute poem. It was flawless.

I was looking through the camera lens. It was beautiful. Very Shakespearian. Very dramatic. Very epic. The sun was spectacular and so was Richard.

At the end of the speech, we cut camera and sound, and Richard sat in silence. Suddenly and spontaneously, all the crew broke into a very enthusiastic round of applause: Richard was the hero.

A few years later, Richard and I met on the set of another film and we talked about the sunrise shot. He told me that he had never been so nervous, neither before nor since: It had been a pivotal moment in his life. He then proceeded to tell one of his fellow actors the story; yes, of how he had learned the words quickly, but also, of how he was inspired by the sunrise, itself, and his need to get it right.

Richard went on to become the one of the most successful and longest reigning Artistic Directors of the Stratford Ontario Shakespearian Festival. He died in 2008.

Our New Year's sunrise this January 2015, was spectacular and very inspiring. For,  to witness something as magical and magnificent as the world turning is more than a physical experience; it is a deeply spiritual and conscious connection with the infinite. It is our life cycle. For me, I look upon a new day, a new year as an opportunity, a possibility to do something that I have never done before; to find another part of the world, or myself, that I never knew; to gain new knowledge on the way to learning some new wisdom; to connect and create with different human beings; and to find that there really is much more to life than the ordinary.

We are so connected to the turning of the planet and the pulse of day and night that we are nature itself. Watching the sunrise is nature observing itself and being at one.

"What is the good of your stars and trees, your sunrise and wind, if they do not enter into our daily lives?
- E M Forster

"The most beautiful and profound emotion we can experience is the sensation of the mystical. It is at the root of all true science. That deeply emotional conviction of the presence of a superior reasoning power, which is revealed in the incomprehensible universe, is my idea of God.
- Albert Einstein.
at 8:14 AM