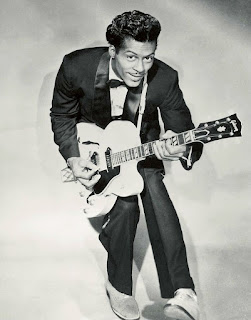 Chuck Berry died earlier this year. He was 90.

He was known as the King of Rock and Roll and he inspired so many singers, bands and recording artists of his day. And today, many artists recognize him as an inspirational legend. He had the insight to mix rhythm and blues with a harder rock beat, thus inventing rock and roll.

I first heard of Chuck Berry when the Beatles recorded a couple of his songs; “Roll Over Beethoven” and “Rock and Roll Music.” Then came his tour of England. This was in 1964 and I was 15. None of my friends knew about him, but I wanted to see this revered living legend. So I took myself to the theatre.

Chuck was the headliner, with the warm-up act being the Animals. The Animals were a new group, and as they played through their catalogue of songs, they stopped to introduce their latest recording,  "House of the Rising Sun."

Wow. This song became such a huge, world-wide hit. I felt privileged to be a part of an audience hearing this song for the first time.

Then came Chuck. His hit at the time was, ”No Particular Place to Go,” a great song that bounced along with beat, melody and humour.

"Riding along in my automobile, my baby beside me at the wheel."

He jumped on stage and out came a plethora of memorable songs that I knew;
“Johnny B Good,” “Roll Over Beethoven,” “Maybelline,” “Rock and Roll Music” and many more. And here he bounced around doing his duck walk across the stage and casting his wide-eyed stare at individual audience members.

Then came his latest hit, "No Particular Place to Go.” And he looked at me. I had a good seat, mid-theatre and I had residual stage lights shinning on me. I guess I was an easy target. He stared at me eye-to-eye, for the longest time, through his hit song and through a couple more, until he found someone else to stare at.

I felt good and satisfied at witnessing a memorable show. I even lined up back stage to get Chuck’s autograph. This, I treasure in my old autograph book.

Through the years, this legendary figure has become even more solidified in the Rock and Roll Hall of Fame. Recently, I was watching a YouTube video of Chuck giving Keith Richards hell for not playing his guitar riff correctly. In a later video, Keith talks about the day Chuck socked him in the eye for picking up his guitar and playing it.

The legend lives on.  Thank you, Chuck Berry.