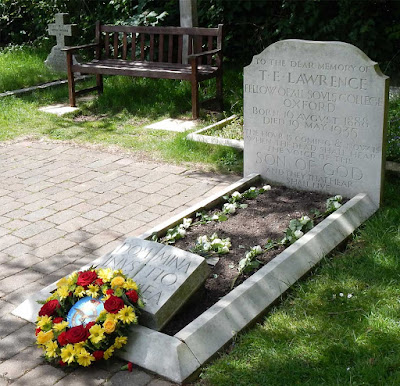 That morning we had stumbled upon the 80th anniversary of the death of T. E. Lawrence. There had been ceremonies at the gravesite, his birth place, the hospital where he died and the place where he crashed his motorcycle. It was a significant passing; 80 years ago, to the day.

We were in a small churchyard in Morton, Dorset, not too far from the Thomas Hardy area of Dorchester. We had visited Hardy's home and had wandered the country lanes of his childhood but I was more interested in Lawrence.

Like many, I first learned about T. E. Lawrence from the David Lean film "Lawrence of Arabia," starring Peter O'Toole.

Thomas Edward (Ned) Lawrence had been a young British Army officer, advisor and the western energy behind the Arab uprising against the Ottoman Empire in the Arabian Desert during the first World War. He had made quite the impression riding the deserts on camels, dressed in the clothes of an Arab Sharif and helping the Arab leaders strategize and win their war. American journalist, Lowell Thomas met him and was so impressed that he created a traveling road show where he spoke about Lawrence and his story. This contributed in making Lawrence one of the most famous heros of World War One.  And Thomas gave him the title Lawrence of Arabia.

It must have been the early 1960s when I first saw the movie, and it inspired me in many ways. I was a teenager and I was caught by the epic story, the adventure, the man, the music, the film. This was a spectacular introduction to great movie making; it was well directed, well written, well photographed. I wanted more, and it was an encouraging prompt for me to want to become an adventurer and a photographer.

Of course, adventure was the draw. I had always been inspired to travel and photograph distant places within the pages of the National Geographic Magazine and other such periodicals. However, it was the great films that solidified some of my goals and challenges.

As I found my way within the photographic and movie industries, I always looked back to "Lawrence of Arabia" as my favorite film. When I saw the next two films from David Lean, "Doctor Zhivago" and "Ryan's Daughter," I was smitten with the photography of films. So-much-so that when I was asked what I wanted to do with my life, I answered in such a way that inspired my mother to help find me my first job in the photographic industry.

Over the years, I saw "Lawrence of Arabia" many times. I bought the script and all the video versions. But the movie was not the man. As I aged, I began to find interest in the character of T. E. Lawrence himself and I realized he was so much more interesting than the character portrayed in the film.

I bought books about his life, his death and his many adventures in-between. T. E. Lawrence was a character haunted by passions. He was very personable, liked and conversed with almost everyone. Although he could not stand the puffed-up, self-centered, English buffoons or military types with whom he worked.
On his return to England, after the war, he was hounded by the press, as are all celebrity heros. He hadn't realized the impact of Lowell Thomas's "Lawrence of Arabia." At first he loved the portrayal, but he began to despise the character as something other than himself.

Lawrence gathered his robes for one last time when he joined the Paris Peace Conference in 1919, taking the side of the Arabs against the imperial ambitions of France and Great Britain. He had always told the Arabs that they would rule their own lands. But, eventually, the lands were split between the European powers.

He was devastated. He felt so betrayed by his own country. He wanted to hide.

He had been promoted to Colonel, received the Order of Bath, the Distinguished Service Order, the French Legion of Honour, the French Crox de guerre. He was offered and refused the post of Viceroy of India and he refused a Knighthood of the British Empire in front of the King.

He resigned as Colonel from the British Army and bought a hill top retreat next to Epping Forest where he built a small shack. Here he worked on his biography "Seven Pillars of Wisdom" and he set up a Boy Scout camp. For a while he also worked for Winston Churchill in the Colonial Office, but to get away from the press he decided to re-enlisted in the RAF under the name Air Craftsman John Ross. Of course the press found him again, and would not leave him alone. He moved to Dorset and joined the Army's Royal Tank Corps under the name of T. E. Shaw. Here he found a tiny cottage "Clouds Hill" where he was able to complete his biography and author a couple of other books. But he didn't like the Tank Corps so he applied to the RAF again. He was sent to a remote base in India for two years and upon return he was stationed at an RAF base in Yorkshire, specializing in speed-boats. He eventually retired at the age of forty-five and moved permanently to Clouds Hill,  his tiny Dorset cottage.

At Clouds Hill he was out of sight. Just the way he liked it. But he was never forgotten. In fact, he became a legend in his own time. His book became highly successful and well received. Winston Churchill said "it ranks with the greatest books ever written in the English language."  George Bernard Shaw said, "The work is a masterpiece, one of the few very best of it's kind in the world."

Lawrence loved speed and was comfortable on his "top-of-the-line" Brome Motor bike. He had owned many. On the 13th May, 1935, on the way back from posting a letter, he swerved to avoid some kids in the road and he was hurtled head first onto the ground. No crash helmet. He died of his wounds a few days later, 19th May, 1935. He was forty six years old. 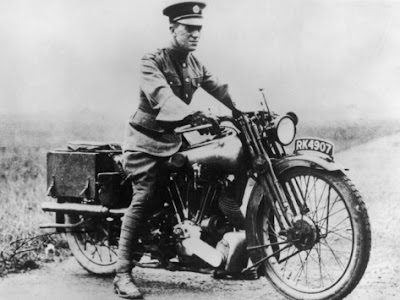 For me, it was time to experience Lawrence first-hand. On a planned trip to England to deal with some family matters, we traveled through Dorset. My wife is a Thomas Hardy fan and I am a Lawrence Fan. Hardy and Lawrence were good friends and lived only a few miles from each other.

We spent some time at his grave, found the place where he had crashed his bike and slowly wandered around his cottage. The cottage is really tiny with four small rooms on two floors, but it was furnished as if he'd left it yesterday. Here was his favourite reading chair, his bed, his bath and the room upstairs where he entertained friends and listened to music. It was a small connection but a connection. 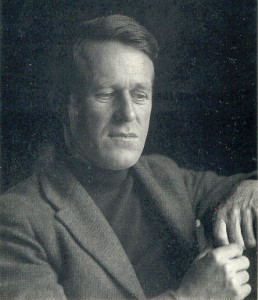 T. E. Lawrence, the man, I always found fascinating. I own many books about Lawrence and his great life, and am pleased to have the 1922 text edition of "Seven Pillars of Wisdom," the memoir written by Lawrence after the revolt in the desert. This version is the complete book before he started to edit it down for public consumption. And as you read about the man, you very quickly come to understand that a movie, no matter how well conceived, could never do justice to a person as complicated and as interesting as T. E . Lawrence. Lawrence was just so much larger than a movie character.

I just started reading "The Young T.E. Lawrence" by Anthony Sattin. Yet another book to shed light on his adventurous life. This time following his path as an awkward youth, and an Oxford University student plotting his life as an archaeologist.

QUOTES:
"All men dream, but not equally. Those who dream by night in the dusty recesses of their minds, wake in the day to find that it was vanity: but the dreamers of the day are dangerous men, for they may act on their dreams with open eyes, to make them possible."
- T. E. Lawrence

"At this moment, somewhere in London, hiding from feminine admirers, reporters, book publishers, autograph collections, and every species of hero worship, is a young man whose name will go down in history along with those of Sir Frances Drake, Sir Walter Raleigh, Lord Gordon, and other legendary heroes of Great Britain's glorious past."
- Lowell Thomas

"I am not much of a hero-worshipper but I could have followed T. E. Lawrence over the edge of the world."
- John Buchan
http://www.castlehillpress.com/publications/2003_seven_pillars_1922_library_edition.shtml
at 8:21 AM