Ever hear of an "Earworm?"

The Wikipedia Encyclopedia describes earworm as "a piece of music that sticks in one's mind so that one seems to hear it, even when it's not being played." It's a haunting melody, a hard to shake tune, something you just can't get out of your head. Well, this is the story of one such earworm, or an album of earworms, which caught the world by storm.

It was March 1978, the movie "Saturday Night Fever" had been released a few months earlier, and flying at thirty-nine thousand feet, high above the clouds en-route to Tahiti, my headphones were rolling to the sounds of "Night Fever" by the Bee Gees. Once more the disco era, the beat, the dancing, the melodies had taken the world by storm. Songs from the new movie were being played almost everywhere in the world and this became the soundtrack for my South Pacific jaunt.

I was on route to an assignment in the Solomon Islands to meet up with a crew to film a documentary for the CBC. Back at home-base, in the bureaucratic offices of the Corporation, the accountants were being insistent that I use up my stacked vacation days or they would pay me for them. I'd rather have the days off, so I asked to take a week off in Tahiti en route to the assignment. Of course, the women in the office, who themselves couldn't stop listening to the music of "Saturday Night Fever," were immediately jealous.

After landing at Papeete, the capital of Tahiti, and walking through the airport, the earworm was in full swing as I was drawn to the taxi driver who did the best marketing of all. He was swinging and singing along to "Stayin' Alive" by the Bee Gees. Then, his soul was on display as we drove along Papeete's picturesque waterfront, looking across at the island of Moorea. With "Boogie Shoes" by K.C. and the Sunshine Band blaring, my cab dodged road obstacles of cycles, dogs, tourists and buses. This was hectic.

Three songs had played before we pulled up to the mid-range hotel where we were met by the bellman who danced toward us singing "Disco Inferno" by the Tramps. This was my introduction to the South Pacific, and so far the trip reminded me of a musical. No, not the popular Rogers and Hammerstein musical, "South Pacific," which was set in this wonderful place; but this new, crazy dance scene.

The movie soundtrack was a compilation of old and new (1977) Bee Gees songs mingled with a few other danceable tunes from groups like The Tramps, Tavares, M.F.S.B. and K.C. and the Sunshine Band. Each group made a lot of money and sold endless tickets for what was, in this viewer's opinion, a very mediocre film. But the album became the most successful soundtrack of all time.

The next day a sign caught my eye. I had been whistling my way down a main street to the tune of the Bee Gees song "More than a Woman," emanating from a local breakfast joint, when I was stopped in my tracks. The Club Med on Bora Bora was having a three-day special. Flight, hotel and all meals, including dancing. I was on the next plane. 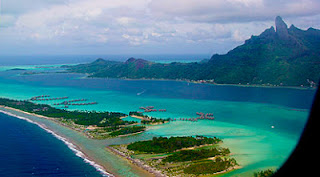 It was a spectacular flight along the French Polynesian string of mountainous islands rising up from the dark Pacific, surrounded by turquoise atolls, warm lagoons and white sandy beaches. This was paradise. So, too, was the Bora Bora airport, sitting on the outer reef. I climbed down from the small inter-island plane and my jaw dropped at the sight of the pure-white sand and the turquoise lagoon stretching toward the island mountain. Could there be a better place on earth? Beside me stood a young woman, also heading for Club Med, who had just taken off her head phones to gaze. The sound coming from those mini speakers was "Jive Talkin'" by the Bee Gees. Somehow I wanted to hear the old classic "Sleepy Lagoon." But that wasn't of the day.

The earworms of BeeGees and the other artists songs on "Saturday Night Fever" were everywhere, and when not being listened to, they were swirling around in the heads of almost everyone I met. I could tell by the smiles and the internal beat that everyone seemed to have.

A speedboat ride to the island, and we were met by a Club Med mini-bus playing "Night on Disco Mountain" by David Shire on the van tape deck. Even an island at the far reaches of the world was connected to the latest culture.

My room was a grass hut and one of many built on stilts out onto the lagoon. This I had to share with another male traveler, as the rooms were only twin accommodation. My room mate was from Fresno, California, and he liked Disco; especially, the Bee Gees.

"Saturday Night Fever" disco ruled everywhere Club Med went, from the white-sand, coco-loco picnics to dance floor crazies. But the most memorable use of this music was as background to crab races. A long box was placed on the dance floor with six individual, separate runs numbered one to six, and each had arrows pointing 'this way.' All this so Club Medders could bet on which crab finished the race first.

To the music of "Disco Inferno" and narrated by French Club Med organizers, six large crabs, each with numbers taped on their backs, were placed in the tracks and expected to race to the finish. Crabs walk sideways, but I wasn't so sure the Club Med people knew that. Some crabs seem to know what to do, while others were placed in the wrong way and, of course, they ran backwards. They were quickly turned around to run, or saunter, to the finish line. Some crabs climbed into the next run so there were two crabs competing. Thank goodness the songs lasted as the races were quite slow and "Disco Inferno" didn't hurry them up one bit. The dance floor was then cleared and the disco was in full swing with people jumping and bumping to the music from "Saturday Night Fever," repeated over and over again. Far from the idyllic and serene paradise lagoon resort during the day, the location became a totally vibrant, rockin' world at night.

That was the year I discoed around the South Pacific. Somehow it got into my soul. I'll always remember those white, sandy beaches, turquoise lagoons, and disco crab races. When I eventually met the film crew in the Solomon Islands the next week, it seemed that they, too, were spinning to "Saturday Night Fever," as every now and again someone would blurt out "burn baby burn" or "oh oh oh oh stayin' alive, stayin' alive." It was so unnatural, but somehow it all seemed natural.

And today? Yes, those great Bee Gee classics still surface in my head from time to time to give me a spin, a shuffle and a hand in the air, disco style. Earworm indeed.

Note:
Recently the Club Med property on Bora Bora was for sale. It sold for 10 million dollars. If only I had known. If I only had 10 million dollars to spare. For this is probably the most beautiful place on the planet, earworms or not. 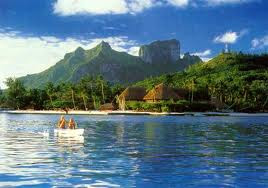 QUOTES:
"Our happiest moments as tourists always seem to come when we stumble upon one thing while in pursuit of something else."
- Lawrence Block

"I never really did any disco dancing."
- Barry Gibb

"A ticket to Tahiti please."
- my mother

"It's one of the most beautiful places on Earth."
- Clive Palmer - Australian billionaire businessman who recently bought the property that used to be the Club Med on Bora Bora.
at 9:45 PM