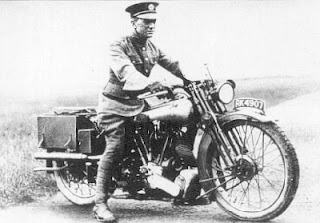 Remember Lawrence of Arabia? It was great film of a great life. Thomas Edward Lawrence was a British Soldier at the time of World War One who, along with the British Army, helped the Arabs in Arabia take back their lands from the Ottoman Empire, also known today as the Turkish. They had ruled over the Arab lands for hundreds of years.
After the war, Lawrence shy’ed away from the limelight and lived in a small cottage in southern England. He worked at the local military camp and drove back and forth to work on his motor bike each day. One day as he was driving home for lunch he noticed a couple of boys about to cross his path. He swerved to avoid them and he was thrown from his bike, through the air, to land on his head on the roadway.
As you can imagine, his head was smashed like an egg and his brains were falling out when they found him. Back then people didn’t wear helmets. He was taken to a hospital where he died a week later. Had he lived, he would have been in a vegetative state with absolutely no real life at all. He died on May 19th, 1935, exactly 75 years ago. He was only 46.
One of the physicians who worked on Lawrence, an Australian named Doctor Hugh Cairns, took note of the injuries and realized that he could do something to help the needless loss of life he was witnessing for the many motorcycle riders in traffic accidents. He decided to help develop protective head-wear, and one of the first riding helmets was in response to the tragic death of T.E. Lawrence. The ultimate result of this tragedy was that many countries in the western world now make it a law to wear a helmet. In the city of Vancouver there is a law that requires you to always wear a helmet when you ride a bicycle.
We human beings are very fragile creatures; especially our brains. However, we don’t always use our brains when it comes to protecting ourselves.
Years ago I remember Actor Gary Busey playing singer Buddy Holly. Busey was renown for riding his motorbike around California without a helmet. He openly defied the helmet law and repeatedly said that it was an infringement on his freedom of choice. One day he crashed. He was bucked off from his bike and his head went smashing into a curb, opening his skull and causing severe brain damage. He was very lucky he didn’t die. But I don’t know if he really fully enjoys life as he once did.
Safety is especially important with our kids and the ones we love. We want to protect them from harm. There are many surveys to quote, but in Leeds, in the North of England, there was a study that said:
Wearing a bicycle helmet has been shown to reduce serious head injuries by 85%.
39% of deaths from cycling injuries occur in children under the age of 15.
Even a low speed fall on a bicycle path can cause a serious head injury.

Study after study around the world confirms that a head smash to the ground can and will most probably kill you. And most Canadian provinces have enacted laws for wearing helmets, except for our friends in Manitoba and Saskatchewan. They say: “The  law discourages recreational exercise during an era of record obesity.”
So, they want to encourage us to live to a ripe old age by being thin, but watch us die with a simple smash to the head from not wearing a helmet. Obviously they don’t have any eggs  with which to show an example of a head smashing on a roadway. For if they did, they would wake up very quickly and change the law.

Here are some serious numbers from the United States from The Insurance Institute for Highway Safety: Bicycle deaths by Helmet use in 1998 - 2008.  It is not known if these injuries were head injuries:
http://www.iihs.org/research/fatality_facts_2008/bicycles.html
The basic finding was that 91% of those killed were not wearing helmets. 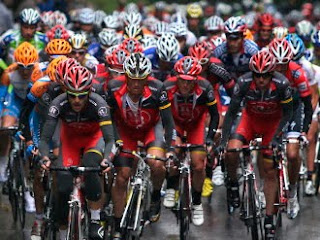 Our brains are very fragile. So why don’t we use them when it comes to personal safety? It’s astounding what we do: We don’t want to wear life jackets in boats or while white water rafting.  We want to send text messages or talk on our cell phone while driving. We don’t want to wear seat belts in a car or on an airplane. We go skiing in avalanche areas and hike where a mountain lion or a bear can eat us for lunch. And it goes on and on. We are really dangerous to ourselves.


As we all know, accidents aren’t planned, and there are many ways to have an accident. As with Lawrence, we can swerve to avoid an accident and be thrown from our bikes or bicycles. We can hit a pot hole with our front tire and go head first over the handlebar. We can slip on a wet surface and smash ourselves on the road, as I once did. It’s a dangerous world. A car can hit us and throw us thirty feet across the highway or we can innocently slip from our bicycle at a standing position and hit our head on the ground. In each case, if our un-protected head hits with any slight force, it could kill us. Our heads will smash like eggs. Yes, we really are very fragile.
But let me ask: What is the helmet law protecting us from? Well, the law is not just to protect us from ourselves, it also protects the public purse: Our tax-payers money. As one Judge recently said about the lack of life vests on an Alberta river, "We're not only trying to protect those people who are engaged in those activities, but also the police, fire, ambulance and other bylaw officers who are going in to rescue these people."

The fact is, they don’t want to have to scrape our brains off the side walk, or pay for a needless brain operation or a smashed up cycling idiot for the rest of their lives at a public funded health facility.

I had a motor bike when I was sixteen. I wore a helmet because the person who sold me the bike gave it to me. One rainy day, I almost slid under a car. If the car hadn’t skidded to a stop about six inches from my nose, and if I hadn’t been wearing my helmet when I banged my head on the road, I wouldn’t be here to tell you about it now. From that young age, I realized that I always needed to protect myself, because there are always accidents waiting to happen. "Safety First" has always been a good motto.

After Gary Busey recovered from his almost fatal crash, he was quoted as saying. “As adults, we should set an example for our children by wearing crash helmets.”

T. E. Lawrence could have contributed much more to our world had he lived a much longer life. But we will never know.


“Helmet laws are for their protection. They may not like it, but their stupidity proves that wearing a helmet, especially on a long ride, is best for everybody. The helmet law's a good law and that's all there is to it.”
- Evel Knievel
“Get a bicycle.  You will not regret it if you live.”
- Mark Twain
“What do you call a cyclist who doesn't wear a helmet?  An organ donor.”
- David Perry
at 7:48 PM