Monty Python and being silly 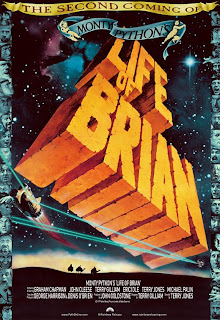 Congratulations Monty Python on the occasion of your 40th anniversary.

My first impression of Monty Python’s Flying Circus was to wonder what all the fuss was about. To me, these guys weren’t very funny, they were just a wild bunch of juvenile and amateurish grown-ups acting silly, like I used to do at school.

The school kids in England, where I grew up, were all silly. We used to do the silly walks and play around with stuffed birds, like the parrot sketch, way before Python was ever thought of. In fact, those of us who were arty and who liked theatre were even sillier. It was really quite normal to act silly in England, to talk in puns and to be able to banter back and forth in non sequiturs and (almost clever) funny, non sensical dialogue. However, I remember one of our teachers telling us that as maturity was a major part of learning and growing up, we shouldn’t be acting like silly girls. “Get to it lads, and act like real men.” Of course, in North America (USA and Canada) boys were taught to be macho. Build your muscles, pretend you like stupid sports, don’t become like a sissy or you’ll be beaten up in the school yard. But it could be like that in England too, where somehow silliness was accepted. When I moved to North America in 1969, I put away some of my childish things and as I worked my way up in the film and entertainment business, I became more serious.

As for Monte Python, even though some of my friends were rolling in laughter at films like The Holy Grail, I really didn’t appreciate their style until I saw The Life of Brian in 1979. By that time it was ten years later and I was now into my profession as a cinematographer in Canada, and I began to appreciate any movie that was different from the regular Hollywood fare. I loved foreign films and I especially loved French films. Then a girl friend dragged me to see The Life of Brian. Well, who can fault a movie where the theme is to always look on the bright side of life? This was my attitude entirely. And the silliness? Well, I'd missed it.

The film parallels the story of Jesus but it takes us on a different journey, to follow the life of another individual who people want to flock to as a leader. Here we see a population who can't seem to think for themselves. They must have a Messiah to follow and they think they have found one in Brian (no relation). But Brian isn't interested in being their Messiah.

My favorite line is when a crowd calls for Brian to come to the window and show himself. His mother opens the window and tells the crowd: "He's not the Messiah, he's a very naughty boy."

It was great to laugh at situations that, when seen from the Python’s satirical point-of-view, were quite nutty and funny. I no longer minded the silliness. The film focused on humanities longing to belong and to follow a leader. We are all sheep. We must flock and we must follow. We are all constantly searching for that Messiah to lead us. And yes, we see it in the modern world where good leadership is quite deficient. The crowds roar together, "Yes, we are individuals." "Yes, we must think for ourselves." But do we?

The film reinforced my philosophy as a free thinker and I will always thank the Python’s for that. Blessed are the free thinkers.

I have now learned to appreciate the Python series and when last in Las Vegas, we loved Spamalot. Yes, congratulations to Eric Idle, Terry Jones, Terry Gillium, Michael Palin, John Cleese and Graham Chapman. Thank you for showing the world that we can all let our hair down and be really silly.


“Silly is you in a natural state, and serious is something you have to do until you can get silly again.”
- Mike Myers

“If I can get you to laugh with me, you like me better, which makes you more open to my ideas. And if I can persuade you to laugh at the particular point I make, by laughing at it you acknowledge its truth.”
- John Cleese

"We don't deliberately set out to offend. Unless we feel it's justified."
- Graham Chapman

"I always wanted to be an explorer, but - it seemed I was doomed to be nothing more than a very silly person."
- Michael Palin
at 3:35 PM