Thanks Billy Bishop or whoever you were. 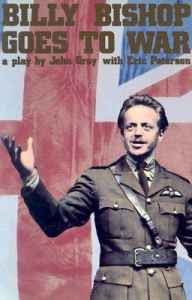 “Ever trust your future to a drunken conversation in a bar?”
That was a line from a brilliant play we just saw, “Billy Bishop Goes to War,” about Canadian, World War One flying ace William A. Bishop.
The line hit home, because when I was 19 years old, I did trust my future to a conversation in a bar. Drunken or not, I’m not sure. It was in 1968. My family and I had recently moved half way around the globe from England to Vancouver. We had been looking for a local pub, (there’s one on every corner in England) but we didn’t find one near our new Vancouver home. However, we did find a Royal Canadian Legion. My mother had been in the English services, so we joined.
One evening, after a long day of working at a job I wasn’t particularly enjoying, my mother and I went for a beer at the legion to discuss our situation. Since moving to Vancouver a few months earlier, neither of us were finding the work we aspired to, or wanted. I had apprenticed and had been a photographer in England, and I was looking for a job in the profession where I could build a career. I just wasn’t finding it in Vancouver.
During the evening of beers and conversation, I was introduced to a Toronto man who was visiting Vancouver on business. We talked about the world and business, and he told me of how some people use other people for connections to get ahead in the world. Modern day networking. So I asked the question: “Do you know anyone in the photography or film business in Toronto?” He proceeded to tell me about a friend of his who worked at the Canadian Broadcasting Corporation. Jobs for photographers and cameramen were posted on the jobs board all the time. He suggested that I take a trip to Toronto, talk to his friend and look at the board.
Following another family chat, I found myself on a flight bound for Toronto, and it wasn’t long before I was chatting with this man’s friend at the CBC.  “Yes.” he told me, there are were many jobs in my profession, and that I should go and register at the CBC employment office.
With my background, education and training, it wasn’t long before I was accepted at the CBC in a foot-in-the-door job as an office junior.  It took me another two years to finally find my way around the CBC and land the career of a lifetime; first as an assistant cameraman on TV dramas and documentaries, later as a cinematographer.  They sent me around the world filming at the far reaches of humanity, and to the great capitals where I participated in the high life. I also became the youngest Director of Photography on major CBC TV dramas. When I was 36, I left the CBC to become a freelance director of photography and director, until I side-stepped the profession to start my own production business in 2002.
“Ever trust your future to a drunken conversation in a bar?” That line from “Billy Bishop Goes to War” was very much about my experience. I did trust my future to a conversation in a bar when I was 19 years old, and strangely, the Royal Canadian Legion where my life was changed, was the Billy Bishop Branch 176 in Kitsilano Beach, Vancouver.
I never saw that man again, but I knew what it was all about when I read the following saying:
“People come into your life for a reason, a season, or a lifetime.
When someone enters your life for a REASON, it is usually to meet a need you have.  They have come to assist you through a difficulty, to provide you with guidance and support, to aid you physically, emotionally, or spiritually.  They may seem like a godsend; and they are.  They are there for the reason you need them to be.  Then, without any wrong doing on either part, you may never see this person again.  What we must realize is that our need has been met, our desire fulfilled;  their work is done.
When people come into your life for a SEASON, it is because your turn has come to share, grow, or learn.  They may bring you an experience, or make you laugh.  They may teach you something you have never done.  They usually give you an unbelievable amount of joy.  Believe it!  It is real!  But, only for a season.
LIFETIME relationships teach you lifetime lessons; those things you must build upon in order to have a solid emotional foundation.  Your job is to accept the lesson, love the person/people (anyway);  and put what you have learned to use in all other relationships and areas of your life.  It is said that love is blind but friendship is clairvoyant.”
at 8:25 AM

It's the Circle of Life, Davy.

I was sad to hear of the death of actor, winemaker, real-estate tycoon Fess Parker this past week. As an actor, he played a hero of mine back in the 1950s, and I expect many Boomers will remember him, not for being an actor, which he did exceptionally well, but for embodying the spirit of a movie hero and icon; Davy Crockett.

Which reminds me of a recent experience that reinforced the Circle of Life for me. This is when something, instigated many years before, can come back around to tap you on the shoulder later in life. Well, I had one of those experiences about three years back, and it was instigated by the 1955 Walt Disney movie, "Davy Crockett."

In 1955, I was a boy of six. We lived in Montreal and the fad that was circulating North America at the time was based on the film and the TV series: “Davy Crockett – King of the Wild Frontier.”

First there was the song:

Born on a mountain top in Tennessee,
Greenest state in the land of the free.
Raised in the woods so he knew every tree,
Killed him a B’ar (bear) when he was only three.
Davy, Davy Crockett King of the Wild Frontier.

We all learned the words and everyone in my school wanted to be Davy Crockett, with a raccoon-skin hat, buckskin clothes and the blunderbuss rifle. Even the kids in the neighborhood dressed like him, but I had my eyes set on something different. Every day when my mother walked me to school in Ville Saint-Laurent, the suburb where we lived, we would pass a certain shop and the only thing in the shop window was a puppet; a marionette of Davy Crockett hanging for all to see. Everyday I would stare at this marionette with it’s little coon-skin hat and buckskin clothes and a small, plastic guitar. I loved the idea of show business. Yes, even back then. This puppet was for me.

However, real life began to over take our family, as my parents were splitting up. And not long after, my Mother sent me to live in England with my grandparents. All was strange and I really didn’t know my grandparents. But that soon changed. When I opened my suitcase, can you imagine my eyes when I saw the Davy Crockett puppet my mother had bought for me?

"Who's that?" my grandfather asked.
"Davy," I replied.
And I started to sing the song.

“Born on a mountain top in Tennessee.
Greenest state in the land of the free.
Raised in the woods so he knew every tree,
Killed him a B’ar (bear) when he was only three.
Davy, Davy Crockett King of the Wild Frontier. “

My grandfather stopped me, “Bar?” he said. “He killed him a bar? Does that mean he was drinking at a bar at the age of three?”
“I think it means he killed a bear,” I replied.
“Killed a bear? At three? Bear, bar. Silly Americans,” he said.

Now, jump forward fifty-two years into the future, to 2007, when I lived in Studio City, California. I was invited to a business luncheon where the Association of Fundraising Professionals were having their annual National Philanthropy Day. I go to many business luncheons, so this was another rubber-chicken lunch for me. As a matter of fact, it was at the Sportsmen’s Lodge in Studio City, so the chicken had bounced many times on the way to my plate.

I was trying to stomach eating when the Master of Ceremonies started to talk about himself. His name was Bill Hayes. He was a TV soap opera actor. But then he talked about his early career and this sparked my interest. He was a young session singer and musician in Hollywood back in 1955, and during a recording session, a producer raced into the studio and said:

“Hey, Bill, please record this song. No one else wants to record it and it may become a hit. It’s for Disney.”

He did record it (one take) and it became a huge hit. The name of the song was “Davy Crockett - King of the Wild Frontier”.

Well, I was in awe of Bill Hayes. I remembered the song our whole Montreal neighborhood had sung, and I went up to him at the end of the program and shook his hand.

“Mr Hayes,” I said. “I just want to thank you for being such a significant part of my life as a kid.”

I told him that I tried to teach my English grandparents to sing his song, and that he had made quite the impression on me. He was very gracious. But I did notice him looking at me as if to say, "You don’t look much younger than me."

When I got home that night, I reached into an old storage case and dug out my Davy Crockett marrionette/puppet. He has been my mascot all my life. I sat him on my desk top and the weathered, old doll began to play the song that I had sung as a six year old. Those words that Bill Hayes had sung back in 1955, introducing Fess Parker as Davy Crockett.


“Born on a mountain top in Tennessee.
Greenest state in the land of the free.
Raised in the woods so he knew every tree,
Killed him a B’ar (bear) when he was only three.
Davy, Davy Crockett King of the Wild Frontier. “
Sometimes the “Circle of Life” comes right back to pat you on the back fifty years on, to say, “Hello, old friend, remember me?”

I'm sure the death of Actor Fess Parker this week was a sad moment for all of us Baby Boomers whose lives touched that era of Davy Crockett so intimately, those many years ago.


“Davy was an interesting thing to live with.”
- Fess Parker

"Fame is like a shaved pig with a greased tail, and it is only after it has slipped through the hands of some thousands, that some fellow, by mere chance, holds on to it."
- Davy Crockett